There is truly more than meets the eye with the prestigious First-Growth, Château Mouton Rothschild. A bottle of Mouton is a piece of history- even the most recent vintages boast a heritage that battled drought, disease, frost, and the Second World War, which Rothschild survived. Sadly, losing his wife in 1945, Elizabeth de Rothschild, who did not survive a concentration camp.

Inside these special bottles, the Pauillac wines pair power, tannin, elegance, and longevity. To praise the wines would be redundant- stylistically flashy, vibrant, intense mineral and tobacco flavors, and opulent. Mouton is luxury. Anyone can appreciate the history and pleasing palate here, however ignoring the artwork that adorns each bottle is nearly impossible.

Since 1945, Mouton Rothschild has supported artists by commissioning a new, unique label for each vintage. Some of the most recognizable artists include Warhol, Picasso, Chagall, Kandinsky, Dali, and even Prince Charles of Wales! Check out this breakdown of 5 of the most iconic labels adorned on a bottle of Mouton Rothschild. 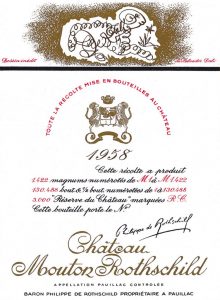 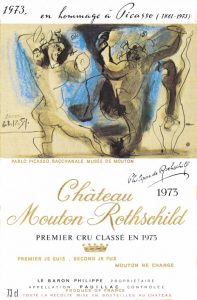 The 1973 Mouton Rothschild label is different than others as it was not a commissioned piece. Pablo Picasso’s work was chosen to adorn the 1973 vintage by Baron Philippe de Rothschild as a tribute to Picasso’s passing earlier that year. The painting was chosen from Rothschild’s personal art collection and reads “in homage to Picasso (1881-1973)”. 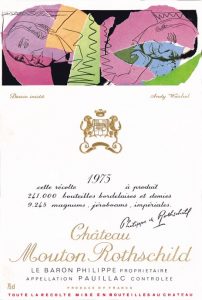 If Andy Warhol is the first thing that comes to mind when you hear ‘Pop-Art,’ you’re not alone. Some of Andy Warhol’s most famous pieces include the iconic silk-screen prints of Coca Cola bottles, Campbell Soup, and Heinz Tomato Ketchup. Warhol stays true to his signature Pop-Art style for the 1975 Mouton Rothschild label- featuring juxtaposed portraits of none other than Baron Philippe de Rothschild himself! 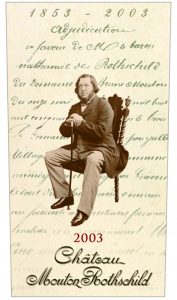 The 2003 vintage marks the milestone of 150 years since the 5th generation long legacy of Mouton began. The label proudly displays a period photograph of Baron Nathaniel de Rothschild (1812-1870) who obtained the Mouton estate from Baroness Philippine de Rothschild on May 11, 1853. The portrait is placed upon a copy of the original deed of sale- the true beginning of a life-long legacy. 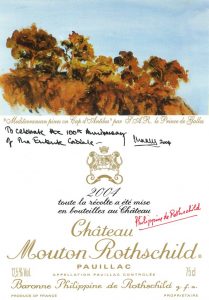 The 2004 label of Mouton Rothschild is held near and dear to the estate as it marks the 100th anniversary of the Entente Cordiale, between Great Britain and France. This political milestone paved the way for a life-long camaraderie between the two countries. Prince Charles of Wales is well known for his artistic talents, and coincidentally is a direct descendant of King Edward VII, who played a distinct role in establishing the agreement between the countries during the First World War. In honor of this transformative milestone, Baroness Philippine de Rothschild felt it most fitting for Prince Charles to be the artist featured on the 2004 label. The artwork displayed features a watercolor painting that was inspired by the French landscape. Below the painting, Prince Charles writes, “To celebrate the 100th Anniversary of the Entente Cordiale – Charles, 2004.”

Do you have a favorite vintage of Château Mouton Rothschild? Let us know by leaving a comment below.

Established in 2002, Benchmark Wine Group is the leading source of fine and rare wine retailers, restaurants, and collectors around the world. Based in Napa Valley, we acquire the most sought-after wines from private individuals and professional contacts, but only when provenance can be verified by our team of acquisition professionals. Our staff draws on decades of industry experience and is dedicated to providing exceptional service to all of our clients. Benchmarkwine.com offers 24-hour access to our cellar, displaying inventory in real-time.