Sunday Sipper: 96+ Point Delille Grand Ciel | Stock Up and Save!

Sunday Sipper: 96+ Point Delille Grand Ciel | Stock Up and Save!

Polished, opulent, and a prime bottle to stock your shelves for the chilly winter months – we’re pleased to offer exclusive access and an incredible price for the DeLille Cellars Grand Ciel 2017. This beautifully balanced Cabernet Sauvignon takes center stage from Red Mountain’s pre-eminent vineyard. The critics agree that this is a show-stopping Cabernet on the brink of perfection and coming into its prime drinking window. Thanks to our exclusive access and buyer’s savvy skill, we’re thrilled to share the wealth while saving you some pennies. Buy 6+ bottles for a 25% reveal that’ll keep you warm and glowing for the coming weeks.

“This classic, flawlessly balanced Red Mountain Cabernet will benefit from 2-4 years (or more) of bottle age and keep for three decades.” – Jeb Dunnuck 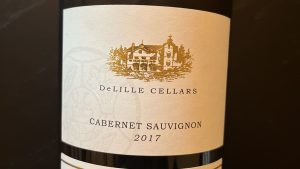 Jeb Dunnuck 96: “The top Cabernet from Red Mountain, the 2017 Cabernet Sauvignon Grand Ciel comes from the Grand Ciel Vineyard and spent 20 months in new French oak. Blue fruits, graphite, leafy tobacco, lead pencil, and a kiss of meaty, iron-like notes give way to a medium to full-bodied, beautifully balanced Cabernet with ultra-fine yet building tannins, a round, layered mouthfeel, plenty of mid-palate depth, and a great finish. This classic, flawlessly balanced Red Mountain Cabernet will benefit from 2-4 years (or more) of bottle age and keep for three decades. It’s one of those wines that builds with time in the glass.” – Jeb Dunnuck

Robert Parker Wine Advocate 96: “Rich, round and ripe, the 2017 Cabernet Sauvignon Grand Ciel bursts from the glass with focus, finesse and precision. Aromas of juicy cherry, black plum and chocolate ganache explode out of the glass with cinnamon and nutmeg nuances. Silky-smooth and medium to full-bodied, the wine remains luxurious on the palate with a velvety mouthfeel, revealing layers of complexity with gobs of dark red and black fruit flavors, as the impeccably balanced mid-palate sashays with grace and finesse. The juicy Cabernet summersaults to a a long, winding and ever-evolving finish with a lasting impression of crunchy plum skin that persists for more than a minute. Run, don’t walk to put some of this in your wine cellar. This 100% Cabernet Sauvignon from the Grand Ciel vineyard was fermented in stainless steel, then rested in all new French oak for 20 months before being bottled and left to age for another year and a half prior to release. Absolutely stunning!” – Wine Advocate