You want elusive, exclusive, and stunning? We heard you and our team found the perfect power play. The superb Geantet-Pansiot Clos Vougeot 2017 offers a stunning glimpse into what the famed Clos Vougeot has to offer in the right care.

Domaine Geantet-Pansiot’s legacy took root over a love story and 3 hectares in Gevrey Chambertin. Edmond Geantet and Bernadette Pansiot brought their son Vincent into the fold in 1977. Vincent is now joined by his son Fabien, while daughter Emilia Geantet began the negociant label. Between 3 generations, you’ll find 49 acres of glory painstakingly grown, hand sorted, and something of a family affinity for Harley Davidson motorcycles and volunteer firefighting. Indeed, local lore holds the father and son duo zipping through the narrow streets of town on vintage sportsters to answer a fire call as a familiar sight.

And sure, discretion may be the better part of valor. But the gregarious vibrancy of the Geantet-Pansiot Clos Vougeot 2017 begs for an audience, lively conversations, and a spot at your dinner table. We’ve got the goods and we’re thrilled to share this Benchmark Exclusive, but you’ll want to move quickly before the secret gets out.

“The fruit was pretty much spotless and we averaged 44 hl/ha with excellent maturities and nothing was chaptalized. As to the wines, they’re round and already approachable and thus they should make for lovely drinking.” – Vincent Geantet, 3rd Generation Vigneron 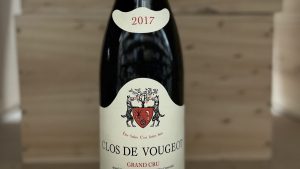